igus reported a sales increase of 8.5 percent in 2018 as manufacturers and engineers continued to demand the highly technical and proven reliability of components made by the Germany-based motion plastics manufacturer.
The company’s sales were strongest in Europe, which accounted for 53 percent of the company’s total sales. Asia accounted for 31 percent of igus’ total sales, and the remaining 16 percent came from companies in the United States and Africa. igus, which runs its North American office out of Providence, R.I., saw its annual sales rise to more than $837 million dollars, or 748 million euros.
igus announced its sales figures at Hannover Messe in April, where it demonstrated 120 new products, from the intelligent plain bearing to the world’s first online platform that brings together suppliers and users of cost-effective robotics.
With its “motion plastics” core technology, igus ventures into new areas of industry. With 3D printing for wear-resistant parts that include online calculation of service life, intelligent “smart plastics”, energy chains with a travel of 1,000 meters, or lubrication-free polymer bearings with operating times that are 10 times longer than competitors, igus continues to emerge as a worldwide leader in developing new solutions for designers and manufacturers worldwide.
Moving into new areas with a start-up mentality
igus is growing organically and continually opening new markets in areas such as the stage machinery and solar sectors. At the company’s main site in Cologne Porz-Lind, there is an upbeat and energetic atmosphere.

“Due to flexible working methods and open structures, we are able to implement new motion plastics ideas in sprint teams very quickly,” said Frank Blasé, CEO of igus GmbH. “We continually test our products and remake them, improving them until the user gets exactly the right product that enables him to move forward.”

At Hannover Messe, igus demonstrated new products that exploit the opportunities of digitization and showcased igus plain bearings, which can be equipped with smart intelligence. With the expanded communication module icom.plus, customers can now decide in which form they would like to incorporate the acquired data from the sensors. From an offline version for restrictive environments to the linkage of values to the igus server for automatic spare parts ordering, the user is free to integrate and read data.

High-performance polymers from igus are also expanding the possibilities for low-cost automation. Enormous cost savings are possible if robots are built with gearboxes and many other parts made of plastic. Robots from $3,300 are already a reality.

In conjunction with 16 industrial partners, igus presented the online platform rbtx.com, which brings suppliers and users together on a platform for lean robotics. The platform allows customers to configure industrial and service robots.

The area of additive manufacturing also grew significantly in 2018. 3D printing capacities were tripled due to new SLS printers and the company developed its own high-temperature printer for the heat-resistant tribo-filament iglide J350.

For frequently bought machine elements such as gears and rollers, igus now offers special online configurators and printed solutions with excellent wear. The service life of these 3D-printed components can be calculated online.

Test laboratory as a driver of growth

Data from the igus’ test laboratory provide the basis for these calculations. Last year alone, more than 264 new plastic components were developed and tested in the test laboratory. In addition, more than 11,300 tests were carried out in the plain bearing area on more than 50 test stands.

In the laboratory for energy chains and cables, over 4,100 tests were performed in 2018, involving more than 10 billion e-chain cycles. At the same time, the test laboratory is also a “think tank” that uses tribo-polymers to develop special solutions for the most varied of industrial sectors and practical applications.

One result is the iglide Q2E plain bearing, which can safely and reliably support up to 7 metric tons in building machinery and agricultural machines without any lubrication at all. Also, the E4Q e-chain is suitable for long travel applications. With its slimline pebble-shaped design, it weighs very little and is easy to assemble without tools with its QuickLock crossbars.

A new testing facility is also being set up outdoors for corresponding long-travel tests. The size of the test laboratory will increase to over 3,800 square meters. In many other parts of the world as well, there are moves towards further expansion of capacities with the goal of supplying customers locally without delays.

In addition to expanded facilities in Brazil, India, Poland and Thailand, a piece of land has been purchased for the new building of the local branch located in Korea. The building, which will be 9,500 square meters, will be completed by the end of 2019.

Blasé said worldwide growth is only possible if customers continue to be the focus of all the company’s activities. “The question that my father, the founder of the company, put to the first customer in 1964 has lost none of its relevance for today”, Blasé said. “He asked: ‘What is your most difficult injection-moulded part?’ Today, we ask a slightly different question: ‘How can we help you to lower your costs and improve the technical performance of your equipment, doing so easily, quietly and without lubrication, and offering a long service life at the same time?‘ With motion plastics, we are continually finding new answers.” 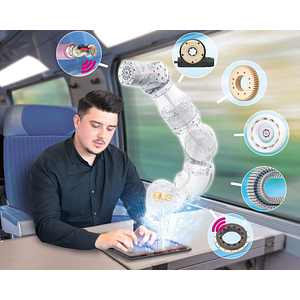